A Game for Two 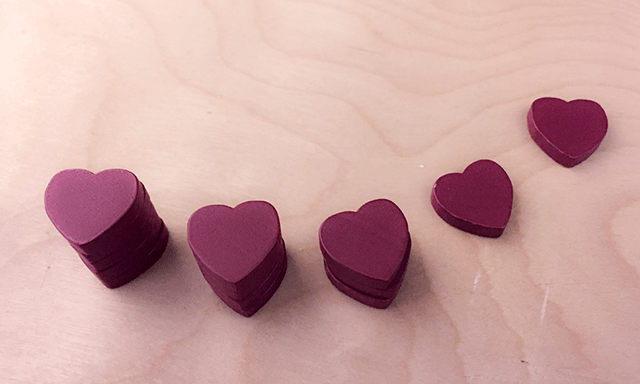 I know I said last time that we were going to discuss storytelling games for DM Appreciation Month. That was before I looked at the calendar and saw that this Sunday is Valentine’s Day. Sooooo… yeah. Way to plan, Chris. General Patton ain’t got nothin’ on you.

But that’s okay. We’ll talk about storytelling RPGs next week. (I promise.) For this week, I want to answer one of the most common questions I get asked behind the counter: What is a good two-player game?

We can all think of examples of great games that take a table full of people to play. It stands to reason that, since tabletop gaming is a social hobby, the more people the better. But if you’re lucky enough to have a significant other who you can play games with, here are some examples of games you can play together for Valentine’s Day.

In “Love Letter,” you are a commoner trying to get your love letter into the hands of the princess. You pass it to a member of the court, who passes it to someone else, and so on. It’s a simple “draw-one-play-one” game. The cards played represent the members of court who carry your love letter, but the cards also have mechanical effects that can gather information on your opponent’s card, protect from other card effects, or potentially knock other players out of the game. The game ends when one player is left standing, or if the deck runs out of cards. In that case, whoever has the highest value card in their hand wins.

“Love Letter” is a great game for couples. Not only is it thematically appropriate for Valentine’s Day, it’s easy enough to teach in minutes if you already don’t know how to play and quick enough that you can probably get a whole game in while dinner is cooking. Or being delivered. Whatever. I don’t judge.

While bugs don’t scream “romance” to me, I’m still going to recommend “Hive” for couples who like to strategize. “Hive” is played by adding pieces to an ever-expanding hex-grid, trying to surround your opponent’s queen while preventing your own from being surrounded. Each side has 11 pieces to accomplish this, each with unique abilities, such as being able to freeze other pieces in place, jump to the other side of the hive, or moving to any position on the outer edge of the hive. The game carries an element of logic as well, as no move can cause a part of the hive to become separated. If you can get past the creepy-crawly aesthetic, you’ll find a game that is chess-like, but easier to play and still just as deep.

Cooperative games are great for couples. You get to spend time playing a game with someone special, but without the possibility of the night ending in a table-flip. The problem inherent with most co-op games is the potential for “team-captain-ism.” One player knows the game and coaches the rest of the table on how to play. Enter “Hanabi,” a co-op game that requires actual cooperation among the players. (Gasp! Shock! faint.)

“Hanabi” is a game about putting on a fireworks demonstration. Each player has cards in their hands of five different colors numbered one through five. The goal is to play the cards in a set sequence for the biggest result. This may sound like the easiest game ever printed, and it would be except for the fact that your cards are turned backwards so only you can’t see them. The table has to give you clues to get you to play your cards in the proper sequence.

This is a game for 2-4 players, but I feel like it’s a great game for couples. In fact, if you go to a game night with other couples, bring this instead of “Pictionary”. It requires good communication between the players to win, and you don’t even need to be able to draw well.

“Ticket to Ride” is one of my favorite games ever printed. It’s simple, takes a reasonable amount of time to play, and complex enough to keep you playing long after you first open the box. (It’s also one of the best episodes of TableTop ever released.) This recommendation comes not just from a professional opinion, but a personal one as well. It is one of the games that my fiancé and I keep coming back to, regardless of my ever-expanding board game collection.

In “Ticket to Ride,” you are a railroad baron trying to build trains across America and lower Canada. On your turn, you can either take cards from the deck, spend those cards to claim a train route, or take a ticket. The tickets denote two cities you will gain bonus points for connecting by train at the game’s end, but you’ll also be penalized those points if you fail to complete the route before the game is over. “Ticket to Ride” is a game that is high-strategy, but doesn’t always put the players in direct conflict with each other, avoiding the awkwardness that can sometimes come with competing with your significant other.

And that’s my list of games you can play with your special someone for Valentine’s Day. For all these games and more, stop by and say Hi!

Remember, all of February is DM Appreciation Month. Our calendar is full of RPG events for you to try out, from “D&D” to Star Wars to “Call of Cthulhu.”

Until next time, happy gaming!