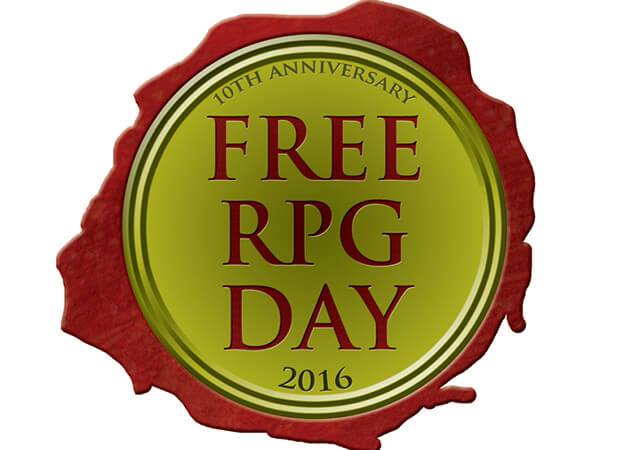 We will be giving away Free Swag Bags - early bird gets the worm!

A Song of Ice and Fire | The Kingsroad

DM Chris
You are members of House Ember, a minor house in Westeros. Your lord, Harlon Ember, died recently and now the new lord must travel to Kings Landing to swear fealty to King Robert Baratheon. It's the first test of lordship for a boy who isn't ready for the title, and if House Ember is to remain burning bright, it is a test that he must pass.

"A Song of Ice and Fire Roleplaying" evokes the feel and brutality of George R.R. Martin's "A Song of Ice and Fire" series, as well as the "Game of Thrones" TV show. Westeros is low-magic and full of dangerous people and shady intrigue. Those who are not strong and/or smart will find themselves trampled underfoot.

Science Fiction
DM Stanton
You are alien mercenaries sent to recover a couple allied greys who crash landed their flying saucer on a hostile planet called "Nevada" and were captured by beings called "Americans." As long as these "humans" aren't heavily armed or overly paranoid, this mission should go easy, right?

Think 1950s B-movie sci-fi where the aliens are "good guys" and humans are "monsters" -- "Day The Earth Stood Still" with more blasters and weird powers.

Fantasy
DM Stanton
You are wolves out to find and destroy a strange creature that trespasses in the pack's hunting territory. The thing is not of Man; it is... something "else." Something "wrong." Something... "unclean." A Lovecraftian mystery seen through the eyes of animals.

If "The Blair Witch Project" was remade as a Disney feature, that's what this game is like.

Cypher System | The Show Must Go On

Modern
DM Stanton
You work for a TV production company sent to a remote island to film scenes for a daytime soap opera... and then the actual fresh-eating zombies show up. The network studio doesn't care about excuses, it has a schedule to keep and refuses to send any rescue boats until the production is complete and on budget. "Make it work, people."

This adventure is like "The Bold & Beautiful" or "Young & Restless" meets "The Walking Dead".

DM Justin
This fun and open-form experience challenges you to decide who you want your character to be and what kind of character you would like to play, not using stats and figures, but by getting to know them and solving problems with friends. Play as a level-0 character and then at the end, let's figure out who they have become.

Players start the game in the dark. They can choose what they see when the lights turn on!

Super Spooky Edition
DM Jack
Your mind is swimming and the past is a blur. You don't know where you are, how you got here, or who these people trapped with you are. Hell, you can't even remember your own name, but this place wreaks of death and you refuse to stay here a second longer than you have to. With every step you take, the fog in your mind clears and another memory falls back into place unlocking the mystery of this dark prison.

Our only hope is to rely on one another for protection, but there is a grim certainty we can see in each other's eyes: Survival is a privilege that not all of us will earn.

This game is a horror-mystery escape adventure.

DM Richard
As the great Dragonwing Festival approaches, dragons gather to test each other's skill as flyers, but the shadows of old battles threaten to disrupt everything. Can a clutch of young, rawscaled drakes prevent disaster?

DM Simon
Welcome to the Secret War Dragons! You are the last line of defense against the forces of evil and corruption, who seek to control the world's mystical feng shui sites, and therefore - history itself! Use your fists, guns, magical fu powers, and future tech to battle for the fate of humanity!

DM Anastasia
Mr. Johnson has lost her friend, Brent. The odd thing is that she can occasionally connect with him via the Matrix, but neither he nor they can figure out where he is. She hopes the team will Brent without revealing his dark secret.

DM Chris
No match in the Starr Wrestling Alliance carries the weight that the House of Pain does. It's a structure that has the potential to make your career, or end it early. The crowd that comes to this show is looking for blood, violence, and mayhem. So go out there and give them what they want.

"World Wide Wrestling" is a collaborative storytelling game that deals with the in-ring and behind-the-scenes lives of professional wrestlers. Players will join the roster of the Starr Wrestling Alliance and put on a show for the fans. Will you be a company player and put the other guy over, or will you put your own ambitions ahead of the company's plans? Anything can happen in the square circle, and it often does.