Once Upon a Game | Fall of Magic 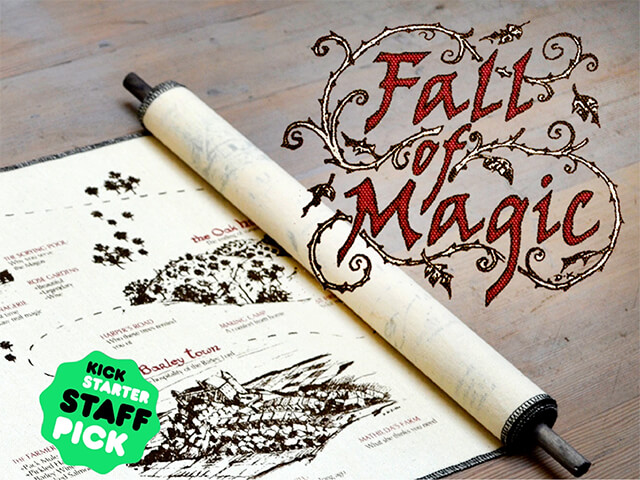 I want you to close your eyes and think about a tabletop roleplaying game. Just grab the first image that pops into your head. Got it? What did you see? A group of friends sitting around a table? A map dotted with minis, tokens, and dice? More snacks than a Super-Bowl party? The large rulebook filled with tables, charts, and enough minutia to make your tax accountant giddy? All True! Yet, this stigma that roleplaying games are “complex” has carried since the beginning.

Well, gentle reader, roleplaying games aren’t made like they used to. Leave your GM screen at home - you won’t need it. Over the next few weeks we will look into some of the best shared storytelling RPGs out there.

Today, I would like to talk about a game that we will be running this weekend. It was voted Kickstarter's Staff Pick - Fall of Magic.

Fall of Magic is a game about pure improvisation and storytelling with little to no “game” going on. Players inhabit the roles of travelers with the Magus, a mystical being leading the players on a journey through a fantasy world to Umbra to prevent the end of magic.

Unique to other games, Fall of Magic utilizes a designated play area, a scroll with a map of your journey on it. Players place markers for themselves and the Magus, representing where they are, and move them throughout the course of the game, building their characters up as they go along.

On their turns, players move to a new location on the map and select a scene. Each scene has a “story prompt” listed underneath it, something that must be introduced to the narrative during your turn. Some story prompts add new information to your character, others change your character in unforeseen ways, and some give you a choice.

The players improvise their scenes from the perspective of their characters, although everyone is allowed to contribute to the story. Instead of moving themselves, players can elect to move the Magus further along the map, and describe a scene from the Magus’ point of view.

The open-ended nature of the story prompts allow for players to expand beyond the typical fantasy tropes and create a collaborative story that is uniquely their own.

The best part is, if you want to try Fall of Magic, Miguel Zapico is running it this Sunday at Twenty Sided Store. Sign Up Now!