It is a time of great celebration. Star Wars fans, having endured almost two decades of besmirching of their beloved franchise, have finally struck a blow against the evil forces of cynicism and nihilism. Striking from hidden bases in the Outer Rim of the Internet, they have found the lost spark of childhood wonder and are carrying it, along with plastic lightsabers and good blasters at their side, to the highly anticipated debut of Star Wars Episode VII: The Force Awakens, which opens next week.

We here at Twenty Sided Store are firmly onboard the hype train for Star Wars, and we’re showing our appreciation of the franchise and its fans with a week of Star Wars events that are completely free and open to all Padawans, scoundrels, and scruffy-looking nerf herders. You will never find a more buzzing hive of fun and geekery than with us next week, so check out our Events page to see all the games we’ll have going on for Star Wars Week! 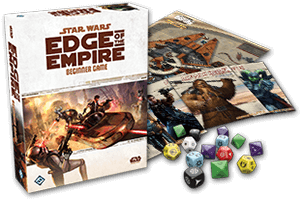 This weekend is a game I’ve been looking forward to for a long time. On Saturday, Luis, Giaco Furino, and I will be stepping into the roles of Game Master to guide several tables through the Fantasy Flight Star Wars RPG. If you’ve always wanted to try the new Star Wars games out but couldn’t get a group together, or have never role-played at all but like the idea of playing new characters in the Star Wars universe, then stick around because I’m going to walk you through these amazing games so that, come Saturday, you’ll be ready to hit the table like a pro. It is time to let go of your conscious self, and act on instinct.

If you’ve played Dungeons & Dragons or any other roleplaying game, then you’ll be pretty well-versed with the concept, but if you’ve never heard of an RPG (or only experienced them in video games), here are the basics.

Simply put, a roleplaying game is interactive storytelling. The characters all take roles as main characters in a story that is about them. They will be faced with problems and challenges, and will need to come up with solutions all while moving the plot forward and avoiding monsters and enemies trying to stop them. A Player Character (PC) describes how their character looks, moves, and acts in the world, sometimes even speaking as the character in first person (if they feel comfortable.) One player at the table, the Game Master, acts as storyteller and role-plays the rest of the characters, including the bad guys. If a character takes an action where the outcome is uncertain or serious consequences exist for failure, the player will roll dice to determine whether or not their character is successful. Play continues until the story ends or the PCs are all defeated. 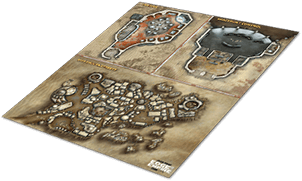 There have been many Star Wars based RPGs in the tabletop world. I know several old-school role-players who still play Star Wars D6 and have a blast with it. But Fantasy Flight’s new Star Wars game is in a league of its own. It uses an innovative dice mechanic to strike a balance between the mechanics of the game and the need to keep the narrative moving forward.

Fantasy Flight’s Star Wars RPG uses special dice to adjudicate the game. (If you’re new and don’t have your own dice on Saturday, we will provide some for use!) These dice are separated into “good” and “bad” categories. When a character makes a check for a skill or combat, they first make a dice pool based on the good dice their character sheet tells them to roll. The GM adds bad dice to represent the difficulty, and the player rolls all the dice at once. 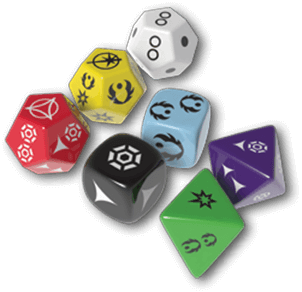 On the dice are various symbols that represent Success, Failure, Advantage, Threat, and other symbols. Once the die pool is rolled, the player then starts subtracting dice that cancel each other out. Failure cancels Success, and Threat cancels Advantage. If any un-cancelled Successes remain, then the check or attack succeeds. If not, the result is failure. However, whereas other games keep success and failure as binary conditions, Star Wars isn’t quite so black and white. The amount of Advantage and Threat that remains has an impact on the game as well. These little twists of luck can lead to success with a tinge of negative consequences (such as successfully hacking into a computer, but alerting a bad guy that there’s an intruder) but overall failure, but with unforeseen positive consequences (such as missing with your wild haymaker to knock out a Stormtrooper, but setting him up for your friend to more easily make their attack.) The game encourages players to think about the effect their actions have on the world at large and how to contribute to the larger narrative of the table. It’s their story, after all. If they aren’t invested in making it more awesome, who will be?

That’s the basic mechanic that underlies Fantasy Flight’s Star Wars RPG. But the cool thing about this game is that it isn’t one-size-fits-all. Star Wars comes in three distinct flavors to give the player three different perspectives on life in the Galaxy after the destruction of the first Death Star. 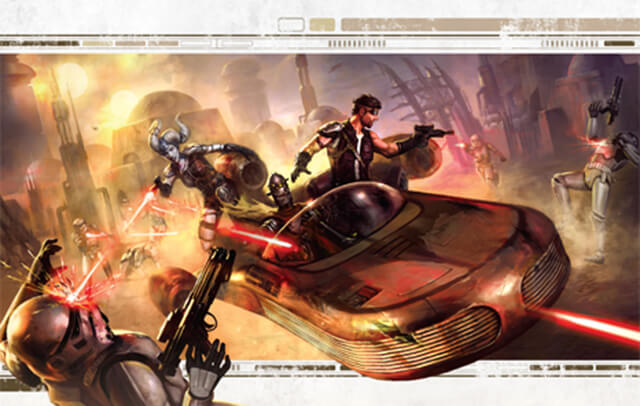 To start, Luis will be running Edge of the Empire, a story about life in the Outer Rim, where the Empire’s influence isn’t as heavily felt as in the Core Worlds. You are bounty hunters, smugglers, assassins, rogue pilots, and slicers, just barely getting by in a world that doesn’t see them as anything more than bantha fodder. The Empire may not be a concern out here, but that doesn’t mean that these fringers have it easy. They still have to contend with the odd Imperial presence, the powerful Hutt clans, pirates, and the dangerous, untamed wildlife. This game is perhaps the closest in theme to what many consider to be the standard “RPG”: the characters are a party held together by a common goal or resource (such as a ship) and go on adventures to earn credits and experience.

Meanwhile, Giaco will be standing by as Red Leader in Age of Rebellion. This game puts the players directly in the middle of the Galactic Civil War, as they take on the Empire as it reels from its defeat at the Battle of Yavin. Unlike “Edge of the Empire,” these characters aren’t avoiding the issue of Imperial rule; they’re taking it head-on. For these characters, the war is personal, and they have everything to lose if the Empire wins. This game is great for those who want a little more military action or space battles in their game, or for those who just want to stick it to the Empire.

And finally, I will be your spectral mentor in Force and Destiny, the newest of the Star Wars games. In this version, the characters may previously have been Rebels or fringers, but now they’ve discovered their connection to the Force, and are doing what they can to learn more about it. With the Jedi Order destroyed by the Empire and Darth Vader, all these Force-Sensitives can do is learn what they can from old holotapes and trial-and-error. But their ally is the Force, and a powerful ally it is. With time and training, these characters can change the fate of the galaxy. This is the game for those players who want to wield the Force, or think that Star Wars is incomplete without a lightsaber.

Each game will run for two and a half hours, reserve your spot now, and try them all!

Check out all of our events during Star Wars Week.

Until next time, May The Force Be With You, always.