Every week Lauren announces upcoming events, new games, and games back in stock!

Full Details on our Events Page

All New!!
11/17/15 - 12/4/16
This Tuesday we are kicking off our first competitive constructed league. Players will have an opportunity to really learn this Standard format, build a cooperative team, and increase their competitive edge while playing for prizes.

Prizes will be awarded weekly as well as in the finals for the top 4.

There are only a few spots left!
If you cannot attend all the sessions you can have a sub fill in for you.

Full Details on our Events Page

Retail Bazaar : Thanksgiving (11/24 - 11/29) Expanded Retail and great specials on games before and after Thanksgiving, followed by a weekend of game demos in our new event space.

Come Check it out - get some games to play, find out what your friends and family like, and come back to get a jump start on your holiday shopping.

Black Friday MTG Early Bird Draft (11/27) All participants in this Draft will get a FNM Promo Roast. Sign Ups close on Thanksgiving or once it sells out. Reserve your spot now!

Berling's Beard Presents - D&D 5e Dungeon Survival Challenge (12/6) A Most Deadly Adventure! Lost for centuries, the Goddess Stone, an artifact out of legend, is said to grant immortality. In this adventure you will plumb the depths of a deathtrap dungeon in search of immortality, gold & glory! Calling All Adventurers!

Pick your favorite enemy color deck or collect all 5! Gather your friends and for a wonderful multi-player casual Magic: The Gathering Format. Commander decks consist of 100 cards, all unique, that work around your commander. Wacky combos, fun cards, and surprising outcomes is what makes playing commander so great! 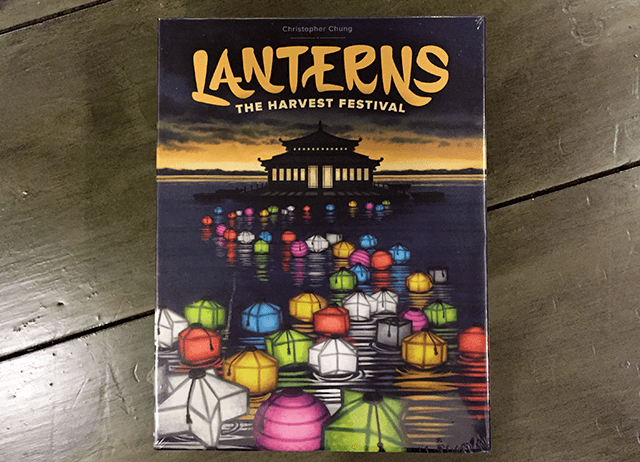 Players take the role of artisans tasked with decorating a royal palace for the upcoming harvest festival. Balancing tile placement and set collection gameplay mechanics, players must carefully place tiles, each of which grants certain benefits to every competitor. Each artisan must try to get their work noticed in their pursuit of becoming the most honored artisan while trying not to let another artisan gain all the praise. 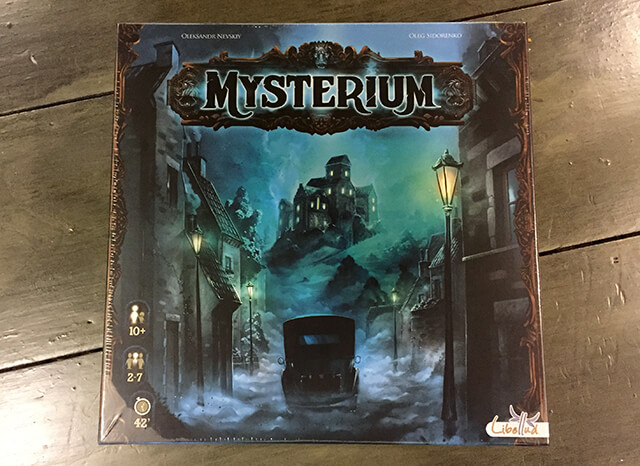 A game of mystery and deduction. One player plays the Ghost and everyone plays Psychics trying to find out how the ghost died. The ghost cannot speak to the Physics and can only communicate through visions. Mysterium is a cooperative game similar to Dixit and Clue.
Players: 2 - 7
Runtime: 42 minutes
Age: 10+ 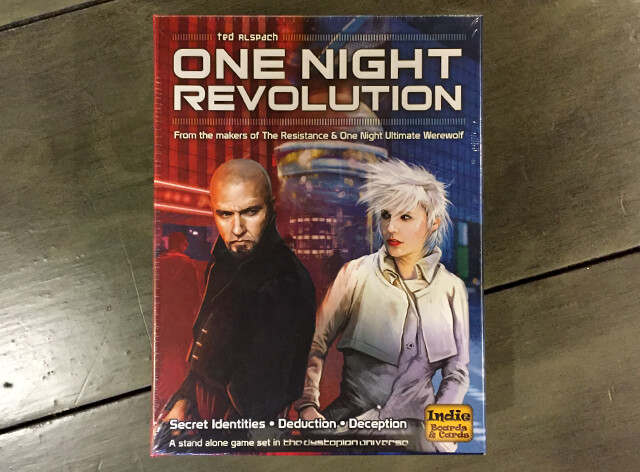 This is an easy to learn party game. Players are either Government Informants or Rebel Fighters. In the night, each player initiates their action based on their job title. All players know what each job entails, but nobody knows who is assigned what jobs and only the Informants know who the other informants are. Or so they think... During the Day, decisions are made through logic and deduction. Players have a limited time to come to a conclusion. Once a decision is made, the accused reveals their ID card. If that player was an Informant the Rebels win, if that player is a Rebel the Informants win.
You don't have the set up like you do in the Resistance, but I really enjoy the accusation portion of this game because it favors a more logical detective type of conversation. I do think this game is the kind of game that gets better the more often you play it.
Players: 3 - 10
Runtime: 15 min
Age: 14+

A cooperative adventure RPG for one to four players. Sure to please fans of Mage Knight and the Pathfinder Adventure Card Game, Mistfall builds on the tradition of building both player characters and adventures using cards that feature equipment, abilities, and treasures. Mistfall sets itself apart from other card-based RPGs with a huge amount of replay-ability from its random encounter system and the relative lack of shuffling involved during gameplay.

The newest expansion to Dixit, Memories showcases the art of newcomers to the series Carine Hinder and Jérôme Pélissier on 84 all-new cards.

Kick down a classy, Victorian-era door to loot and adventure with the newest iteration of Steve Jackson's classic Munchkin series. Featuring the art of Phil Foglio, one of the pillars of comedic fantasy art, players will don goggles and wield steam-powered weapons with way too many clockwork gears on their quest to reach level ten, while backstabbing as many friends as possible.

In this game of secret betrayal, players pass around the Godfather's cigar box, each deciding in turn whether to remain faithful, turn traitor and snitch to the CIA, or betray the boss and steal some of his diamonds. Upon discovering the disappearance of his precious jewels, the Godfather must discern which of his henchmen are to be trusted and which are to be sent to sleep with the fishes.

Half puzzle and half board game, Pixy Cubes features two gameplay modes that challenge players to build patterns out of cubes featuring a variety of colors and shapes. Players either race to be the first to complete their designs or must memorize a pattern and then build it from memory. Includes extra blank cards so players can design their own challenges.

Adding a new twist (literally) to the classic game of dominos, Bendomino adds new strategic possibilities by warping the shape of tiles. Ideal for longtime domino players or those introducing the game to new players.

Kobolds Ate My Baby! Even More Things to Kill and Eat! (Sourcebook)

Rounding out the first cycle of deluxe expansions for the immensely popular Living Card Game, Data and Destiny expands not only the NBN mega-corporation's options, but also adds three new Runner mini-factions. These three new Runners not only provide unique new play-styles, they also allow hackers with the influence the spare to access never before available abilities in their quest to take down their corporate opponents.

A innovative and adorable twist on classic memory games, Pengoloo has players roll the dice and pick up penguins to search for eggs of certain colors. Players must remember not only where each type of resides, but also which eggs have been claimed to be victorious.

In this kingdom building game, players combine card drafting and resource bidding mechanics to acquire new branches to build up their pyramid-shaped board. Leveraging the resources, influence, and other advantages these cards provide, each players vies to hold the most power over the world.

A stock market game that traces its root back over a century. Players trade commodities during fast-paced rounds, then ring the bell to declare that they have cornered the market on a certain commodity. The traditional bull and bear of the stock market add a wild, and sometimes perilous, element to gameplay.

Combining a strategic memory game with chaotic card tossing, Alien Wars has players uncovering the riches of their starfields while blasting away their opponents cards, denying them of their weaponry and planetary systems. 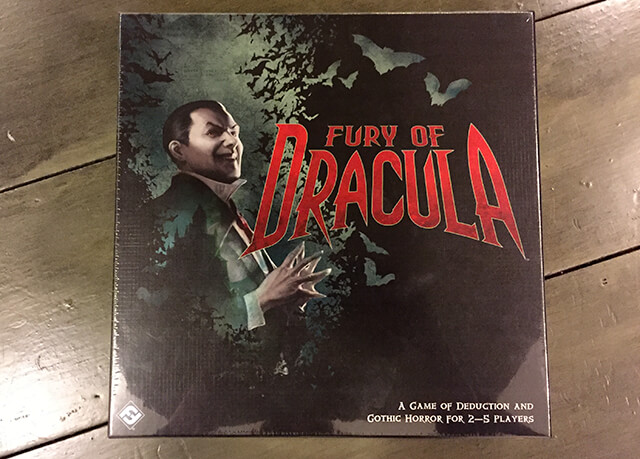 This game of gothic horror pits one player as Dracula against a team of vampire hunters. As Dracula secretly moves through Europe, leaving a trail of minions, traps, and dead bodies, the hunters must corner the evil count, a task made all the more difficult by the target's ability to shapeshift into a wolf, a bat, or even the mist of a foggy night.
Players: 2 - 5
Runtime: 2 - 3 hours
Age: 14+ 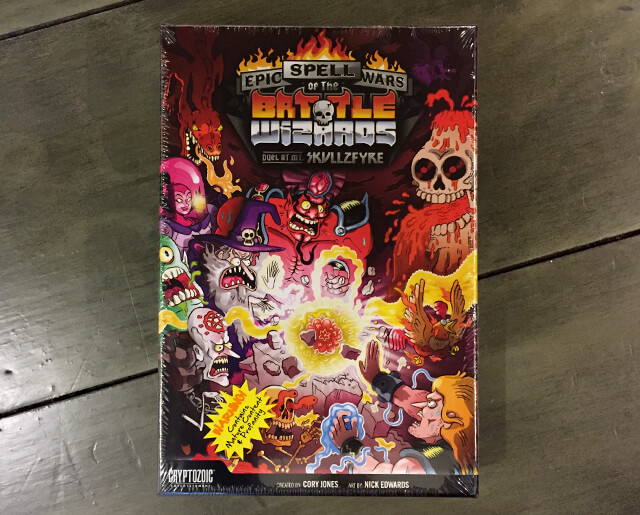 Be the last wizard standing in this king of the mountain style card game. Draw 5 cards, play three that form the ribbon of your wizards name. On your turn, cast all your epic wizard spells against your opponents' wizards. Best of three rounds. This game has amazing art, fun humor, and lots of cartoon violence. Super easy to pick up and play, but this game does contain mature content and profanity.
Players: 2 - 6
Runtime: 30 min
Age: 15+ 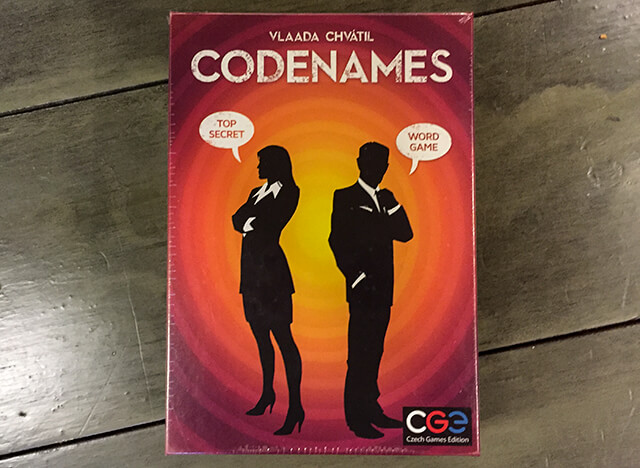 Pitting two master spies and their underlings against each other, Vlaada Chvátil delivers an excellent new party puzzler. In this game, two players must guide their team to their agents' codenames using only one-word clues. If the clue giver isn't careful they run the risk of leading their team to uncover the codenames of the opposing team, or worse yet, running into the assassin, and losing instantly.
This game can be played competitive or cooperative.
Players: 2 - 8+
Runtime: 15 minutes
Age: 14+

Been out of the base game forever, the grandmaster of hidden role/betrayal games. A whole lot of game on its own, with some really great expansions.