All week take advantage of these great deals! 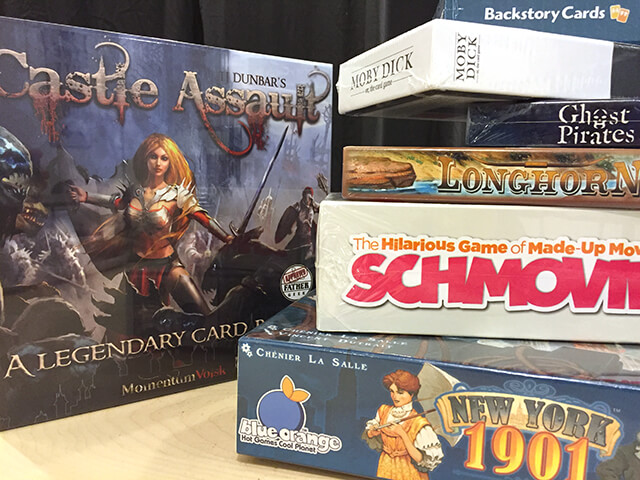 Moby Dick, or, The Card Game

Mark Perloff
Moby Dick, or, The Card Game is a dynamic and action-packed card game for 2-4 players, lovingly adapted from Herman Melville’s classic novel. Experience the wonders and terrors of 19th century whaling and interact with some of the greatest characters in American literature in a game that's easy to learn but fathoms deep.
Assemble your crew, hunt whales and try to survive the final chase for the White Whale!

Dan Raspler
Space Cadets: Away Missions is a cooperative, scenario-based, tactical action game for 1-6 players, set in the Golden Age of science fiction. In this game, players take on the roles of adventurous human spacemen who explore UFOs, acquire Alien technology and fight hostile extraterrestrials.

Tim Rodriguez
Ghost Pirates is a game of ship to ship tactical action for 2 scurvy players. Send your crew on offense sorties to your opponents ship, and keep a few behind to defend the captain while you try to make your opponent's captain walk their own plank!

Heartcatcher is a two-player, casual-competitive card game. Your goal is to catch as many hearts as you can - but watch out for the tricky effects of the Secrets!

Backstory Cards is a RPG accessory/writer's toolkit set of questions that blends your characters and setting concept into an intriguing set of relationships and history. It’s tailor-made for games where the player-characters already know each other—from fantasy adventurers to star marines, from supernatural beings who share the same city to global-hopping troubleshooters.

Sunday 12/20
Join Twenty Sided and Tripleclix for a launch party celebrating a collaboration between Dungeons & Dragons, Todd James, and Mishka.

New & Back In Stock Games

Blood Rage - This game of Viking conquest combines drafting mechanics with a miniatures-based tactical game. At the beginning of each of three Ages, players draft the blessings of the Norse Gods as they pillage lands and win and die in glorious battle to secure their space in Valhalla in the face of the impending doom of Ragnarok.

Dice City - A resource-management game where the locations in your city give you abilities each turn. But here's the catch: rather than playing the cards, each card is matched to the face of a die, and activates on that die roll. As you build your city, the faces of the dice change, making each turn different from the last. Flick 'em Up - Play as either an outlaw or the sheriff, and raid or protect the city. A physical game, where you flick wooden tiles to rob banks, free prisoners, and attack innocent bystanders. Or, you try to stop the outlaw and their band of wooden rebels from destroying your carefully-built town.

Diamonsters - The newest offering from the designer of Machi Koro, Masao Suganuma, Diamonsters brings the aesthetic of the hit city building game to a game about diamond-hungry monsters. Players must bluff and guess their way to playing the largest monsters available, without playing the same monster as their opponents, in order to collect three matching monsters or eat five diamonds to win.

Catacombs - Half Action RPG, Half Dexterity Game, Catacombs is a dungeon dive board game where the players must flick wooden discs and use their characters' special abilities to defeat monsters, collect loot, and delve deeper into the catacombs.