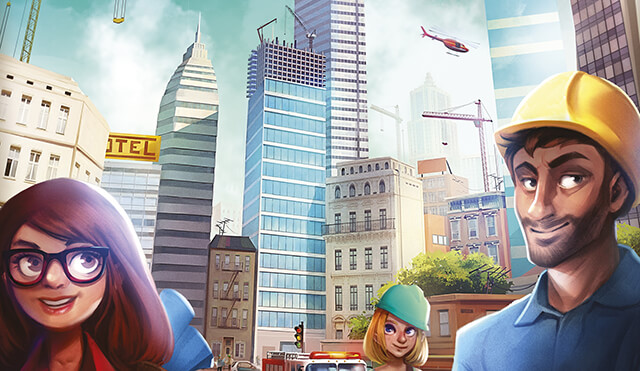 Quadropolis has a really great strategic tile picking and placing game mechanic for a city planning game. As you attempt global notoriety, your architects must be working on building the perfect city for it's inhabitants. To do this, each architect working for you must select a building tile from the grid and then place it on your construction site. However, there are restrictions and as Mayor you must always be thinking several steps ahead.

Gather your military forces and wage war against the enemy. In Star Wars Rebellion Players will take on the role of members of the Rebel Alliance or the Empire during a Galactic Civil War. This Epic Boardgame board game comes with hundreds of sculpted minis and a board that spans multiple star systems. I seriously can't wait to carve out some time to play this game!

And then We Held Hands

I love the name of this game, and the artwork really sets the tone. And Then We Held Hands is an cooperative 2 player game. You play as a couple revealing emotions, overcome objectives, and mend a broken relationship.

Not only did they bring back the original - They released a whole new game as well!
In both Epic Spell Wars, players draw five cards, play three that complete the name banner of your wizard. Then, play the spells on the cards in order to defeat your opponents and be the last wizard standing.
In Epic Spell Wars II, there are some new additions to the game: Blood, Reactions and more creatures! Blood points make your spells more powerful, Reactions allow you to play a full spell before you die, and every wizard needs a familiar - these new creatures are loyal companions.

Skull is an ancient game of deception and perception. The El Dia de los Muertos inspired art work is colorful and ornate. Skull is simple to learn, and game play is fast, but difficult. Set your tiles, place your bets, and try not to reveal any skulls. You have no idea how excited I am to have this game back in stock. It is the most elegant game in it's genre.