People ask me all the time what made me decide to open a game store, and my answer is Luis. When we first met, Luis was running Magic events out of The Change You Want to See Gallery on Havemeyer and Metropolitan, a few blocks from where the store is now.

Shortly after Zendikar released, Luis rented out the gallery for Drafts (and eventually Standard). As Worldwake approached, it was time to host the first Twenty Sided Prerelease.

So that brings me to #1 on our list of The Origin of Twenty Sided Store's 20th Prerelease:

When: February 2010
Where: The Change You Want to See Gallery, 84 Havemeyer St., Williamsburg Brooklyn

This was the first sanctioned Twenty Sided Prerelease. It was small and intimate. Luis was surprised when people he did not know showed up to play!

2) Rise of the Eldrazi

By this time Luis was selling out the gallery space for Friday Night Magic tournaments. When Rise of the Eldrazi was about to release he knew he needed a bigger space, 440 Studios in Manhattan. He had created something special and everyone wanted to be a part of it.

Luis was able to rent out extra rooms at 440 Studios for side events. I ran the concessions stand selling fresh baked Ivéta Scones and made all the volunteers iron-on Twenty Sided t-shirts.

After the event, players kept commenting on how nice it was to be able to have healthy options for snacks. Everyone wanted to know how they could get a Twenty Sided logo t-shirt! I knew we were on to something. This event was the seed that sprouted Twenty Sided Store brand you know and love today. 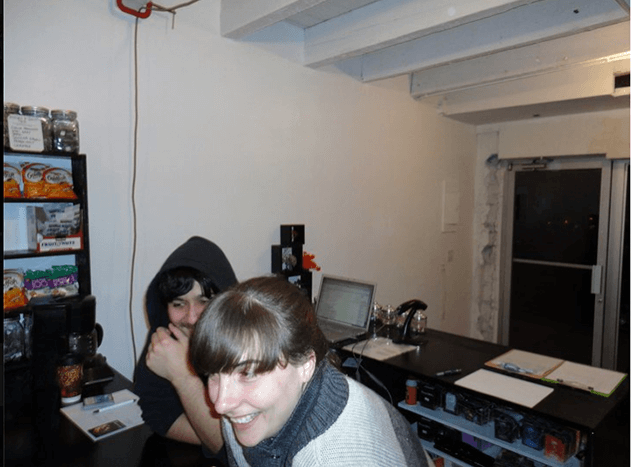 This was our first prerelease in the space on Grand Street. New York was hit with a record heat wave that summer, and we did not have AC units installed. We did have huge industrial fans and aimed them at the walls so cards wouldn't blow away. By round 3 it was so hot we were giving away ice cold bottled Orange San Pellegrino just to cool everyone off. 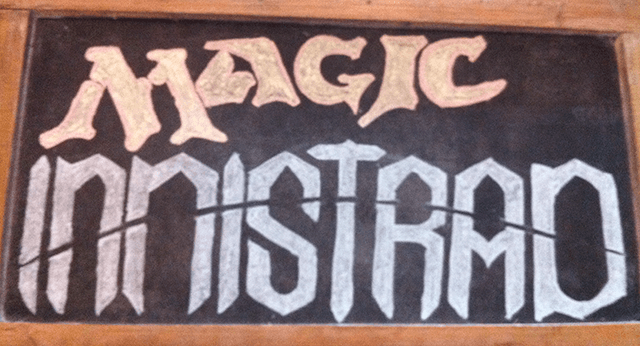 Innistrad was our first large fall set Prerelease at Twenty Sided Store. It was also our first weekend long Prerelease, running two events on Saturday and Sunday. At the time, we were one of a small handful of WPN locations running Prerelease Events in the five boroughs.

Players camped out hours before tickets went on sale at 10am. We had a line out the door and around the block. In less than 20 minutes, we sold out of every slot for the entire weekend. 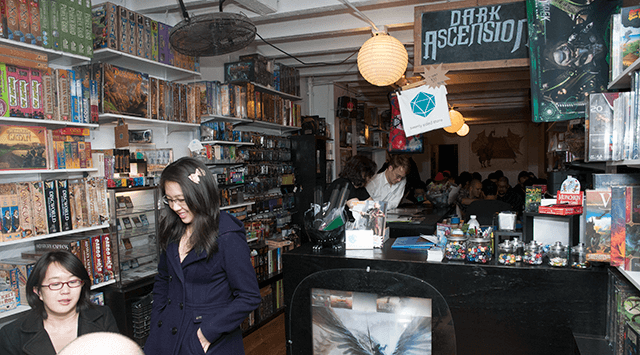 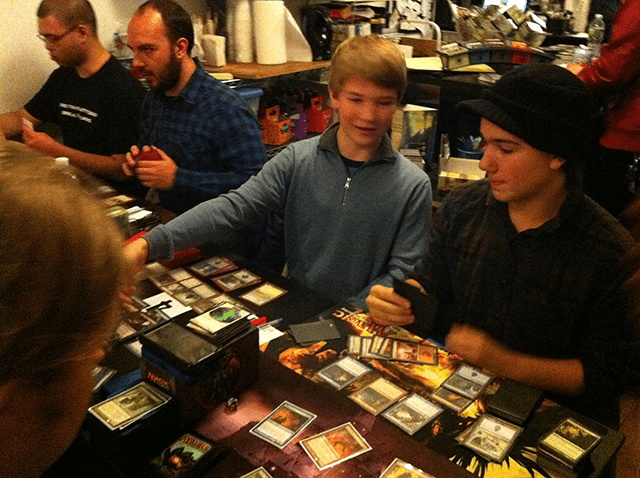 With Innistrad selling out instantly, we needed a better system. The "wait around the block" plan wasn't going to work this time. We asked one of regular customers to write an online signup system for us, and it was a godsend. 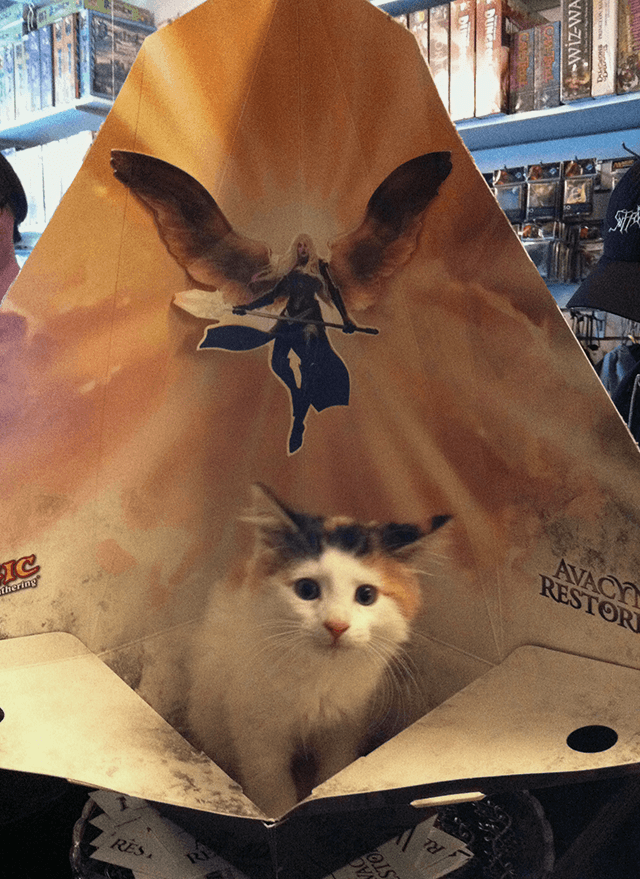 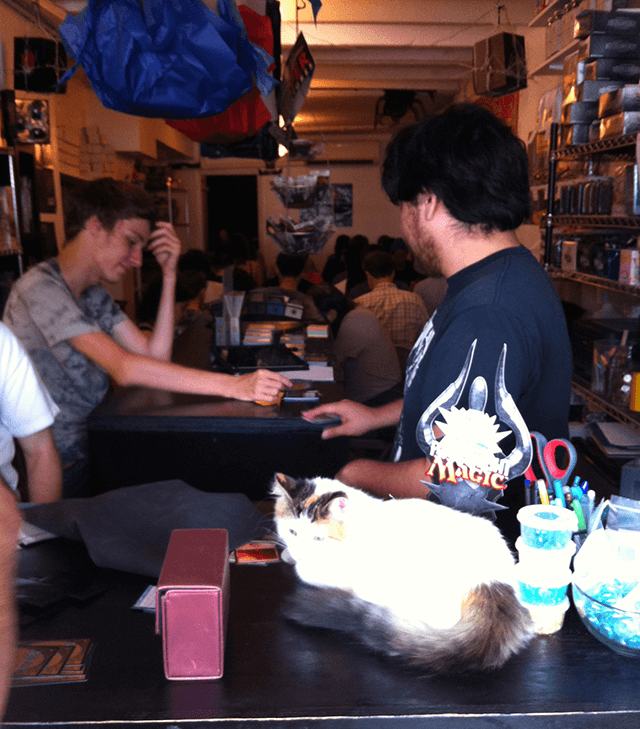 Arrow was a regular customer at the store, frequently setting up shop on the counter or curled up in the nearest open box. 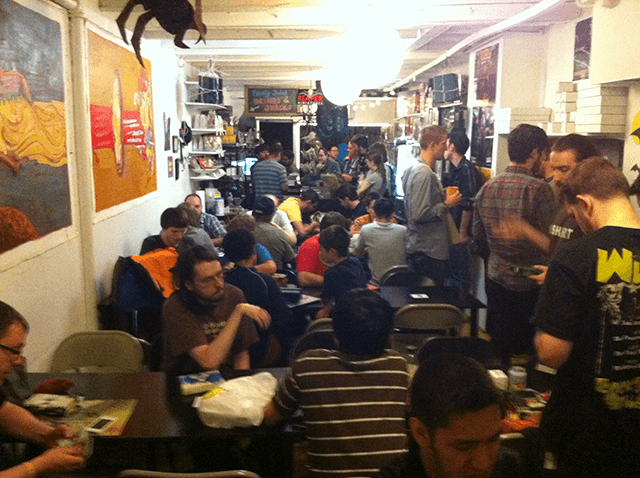 Players who remembered Ravnica were super excited for the Return to Ravnica. This set was full of rich setting, and I felt we could enhance the overall Prerelease experience by creating a lore inspired game as a way to distribute prizes. Luis came up with trivia questions to test MTG players knowledge of the Guilds. This tradition has continued every Prerelease since and is one of the things that makes Twenty Sided Store's Prereleases unique.

"I was working at Twenty Sided for a week or so and had never actually played a competitive game of Magic. I barely knew how to play, and I figured I should probably start to learn, so I signed up for the midnight Prerelease (RTR)... and then drug my tired butt into work for the 9:00am shift the next morning!" - Giaco Furino 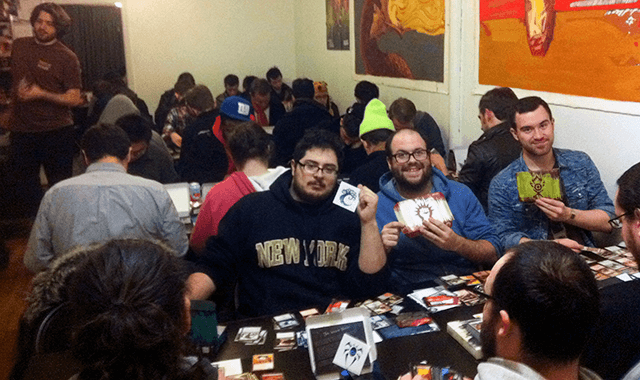 Giaco was right back at it with another Midnight Prerelease!

Gatecrash was the second Prerelease to offer seeded packs. The entire presentation of the GTC Prerelease pack was really great. Players strongly identified with their color, faction, and guild creating a strong bond with the Block as a whole. 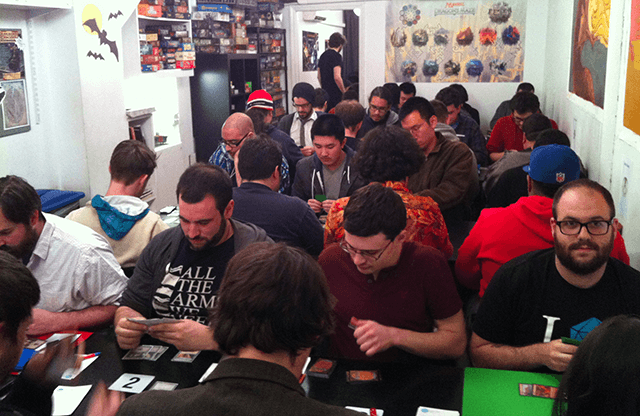 Our space was really small back then and it was tough finding a good spot for the huge map of the Dragon's Maze.

Finish the Maze!
We got the whole room to work in teams to be the first Guild to finish the Maze and win a sweet achievement card. Each card ad a code, when a player entered the code on their Planeswalker Points page they would get an achievement to mark them as either a Maze Runner or Champion of the Maze on behalf of their Guild. 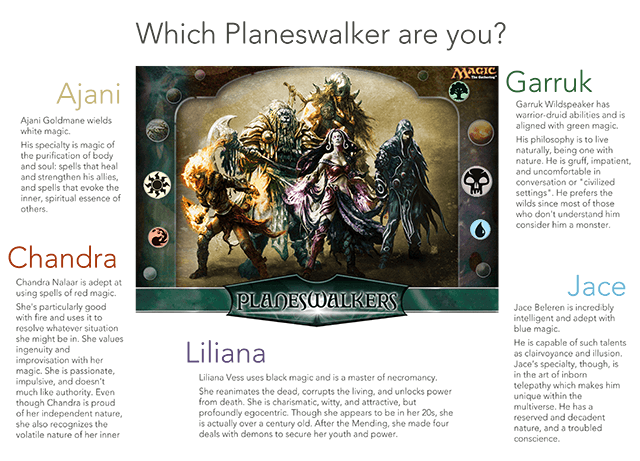 Magic: The Gathering attracts a very competitive crowd in New York City - even for casual events like Prereleases. We didn't want to exclude our newer players, and decided that core sets were perfect for engaging them.

Luis hosted a ton of Learn-to-Play events leading up to the Prerelease and we offered discounts to competitive players if they encouraged a newer player to sign up. For the event itself we featured a trivia game to highlight the lore of each Planeswalker, reinforcing the five mana colors in relation to style of play. 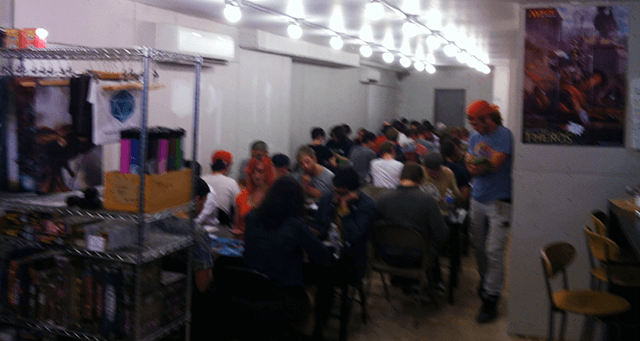 We spent the entire month renovating the store, frantically getting it ready for the Theros Prerelease. The drywall had not been painted yet and we installed the lights the night before the event! 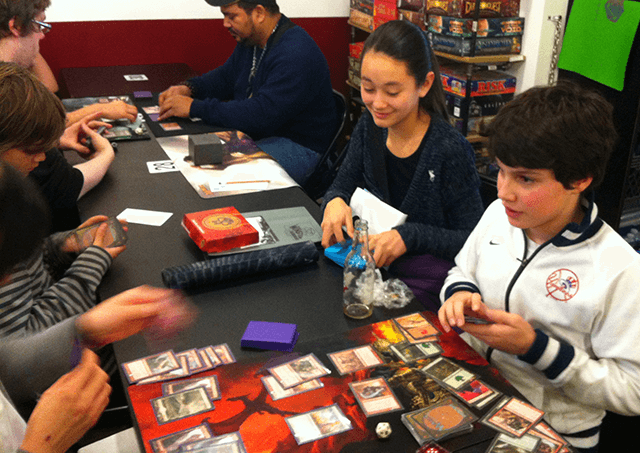 Born of the Gods, and Theros block overall, tried something very interesting. It created unified themes that would play out over the course of the block - Hero Cards, Destiny, and such. While it didn't resonate with every player, this type of unifying theme is almost certainly something we'll see again for future sets. 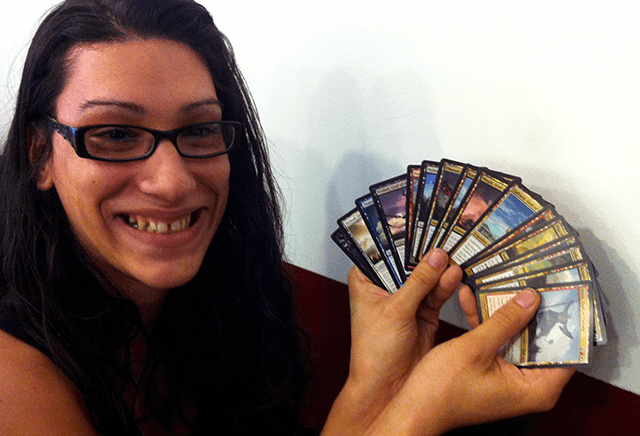 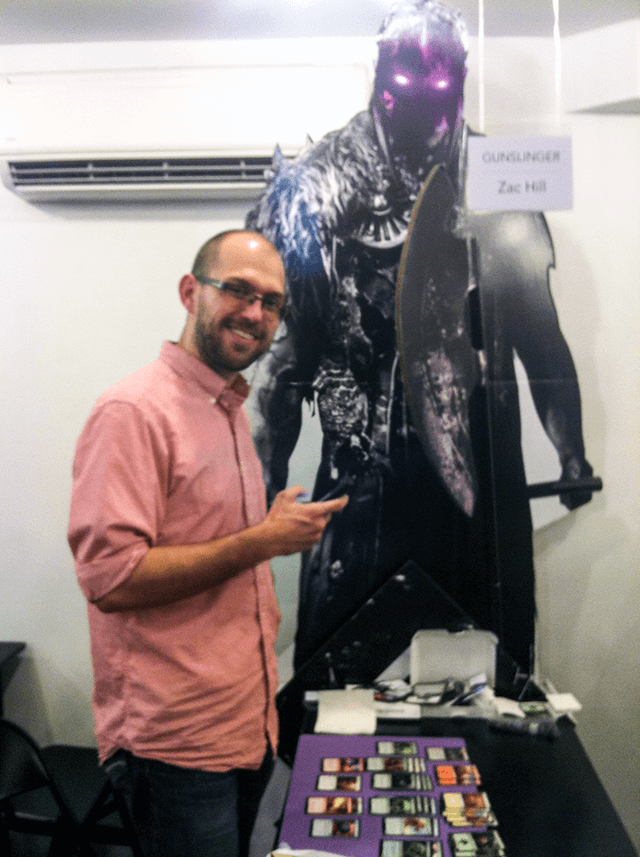 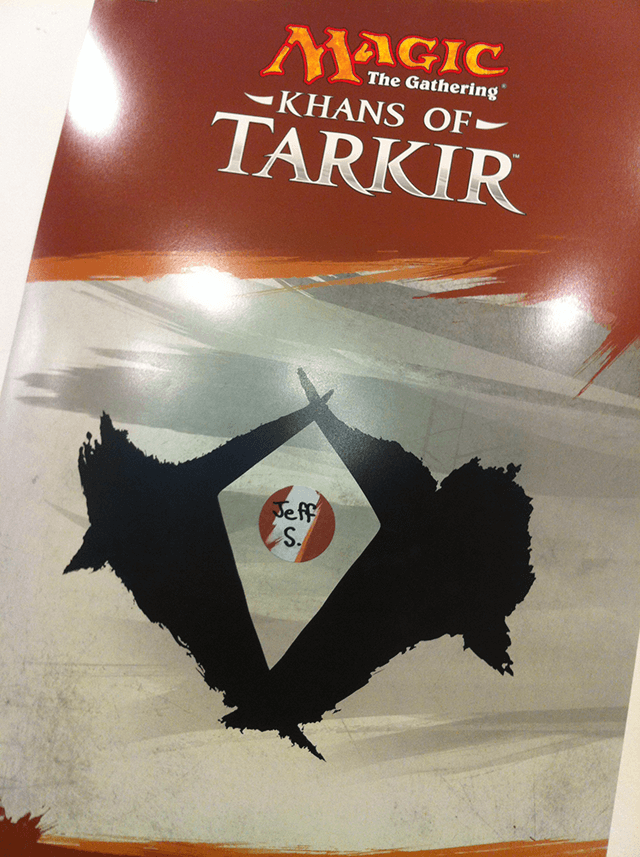 This was the first time we decided to have only 3 rounds for the Midnight Slot. Similar to Ravnica, the Khans of Tarkir clans created a great way for players to identify with the colors they like best. 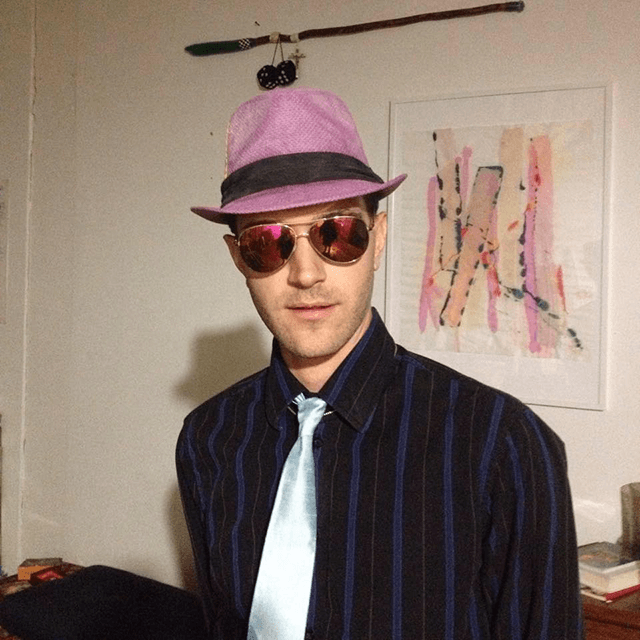 "I dressed up and brought my girlfriend to my first prerelease. I built an Abzan deck and faced three opponents who were using virtually all the same cards as me! The time limit was a factor because whoever attacked first was at a disadvantage."
- Mike Schwab 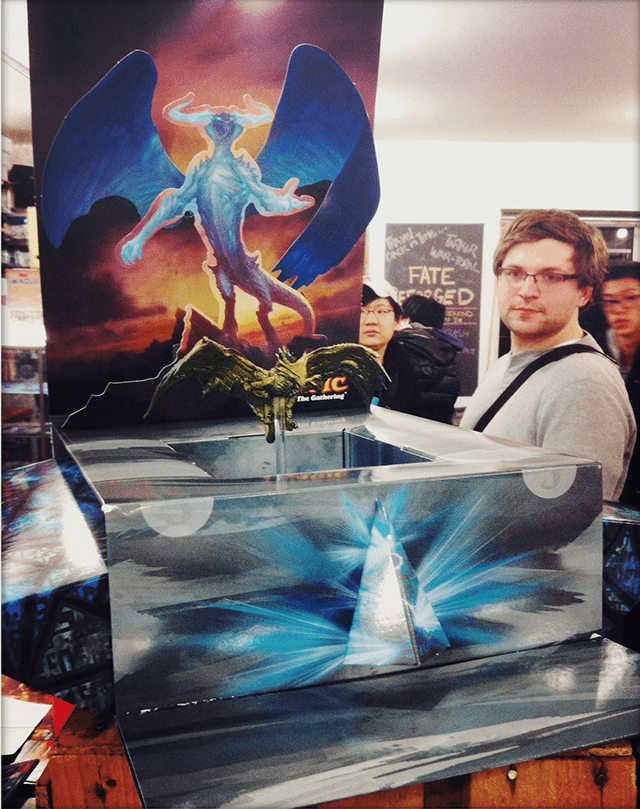 Receiving Ugin - Best Wizards of the Coast Prerelease Feature! It was so good we didn't have to come up with one on our own. 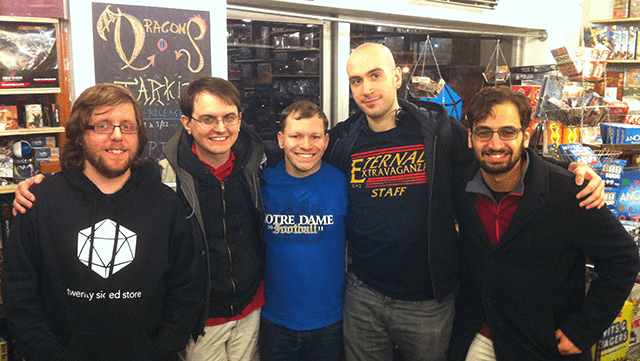 Chase passes his L2 and celebrates with the NYC Judge crew. 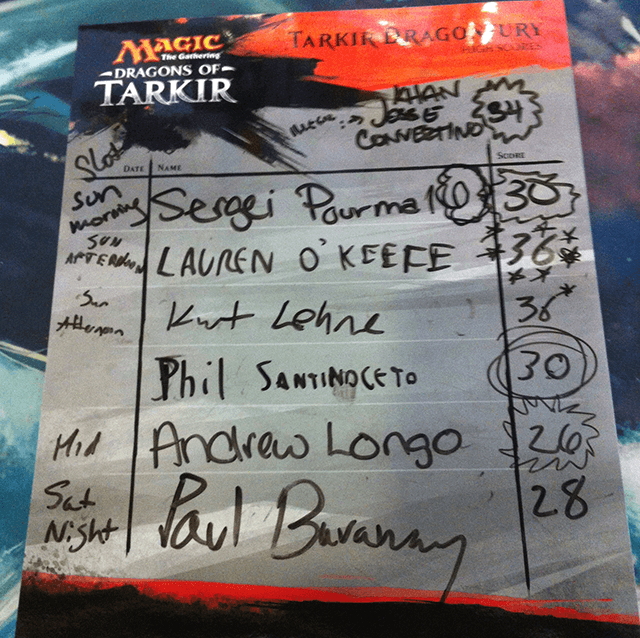 MTG Bowling Results. This took some physical skill and Lauren O'Keefe beat everyone with 36 points!

Twenty Sided Store's 20th Prerelease was a blast! Origins focuses on the stories of how the Planeswalkers got to where they are today.

Since this was our 20th Prerelease we went all out for this event! We worked very hard to create a unique and wonderful gaming experience all weekend long, especially for our all NEW Premium Saturday slots.

Thanks to everyone who participated, the weekend was a huge success! This was the best Twenty Sided Store Prerelease yet! 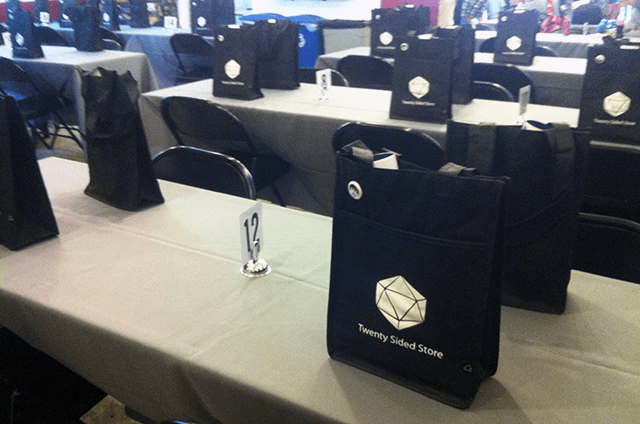 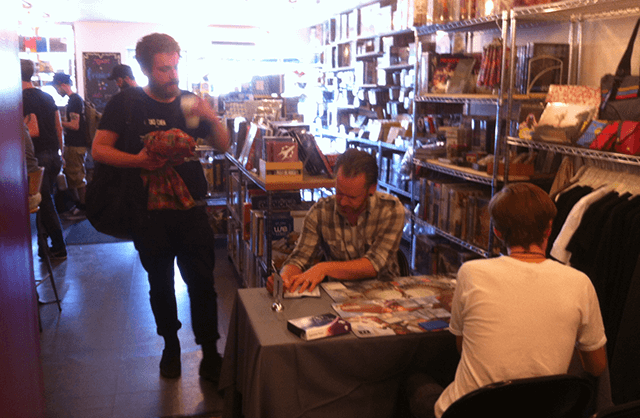 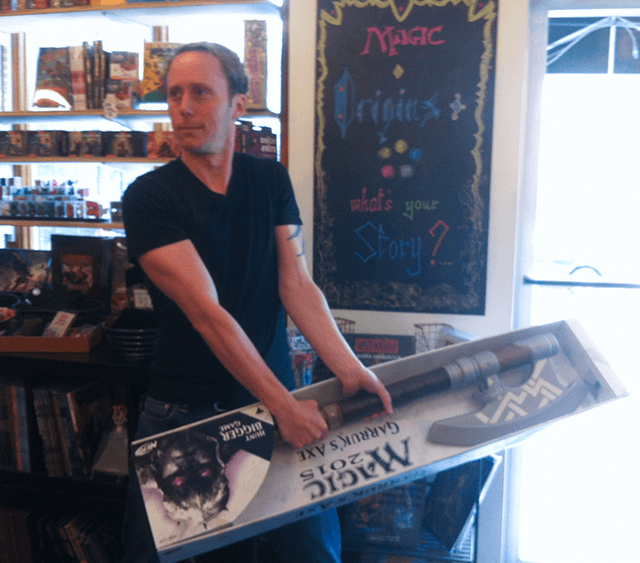 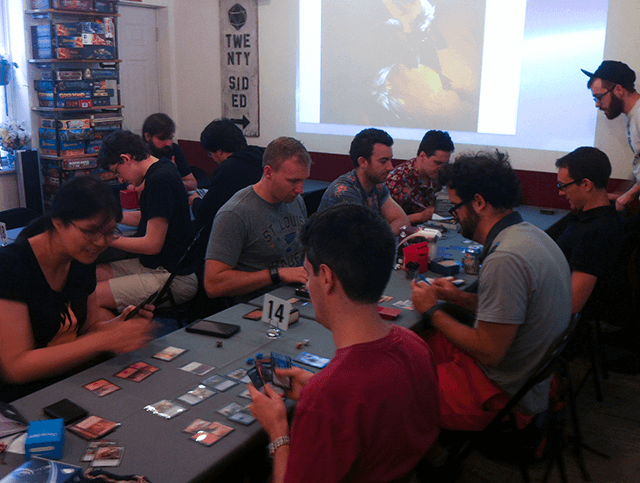 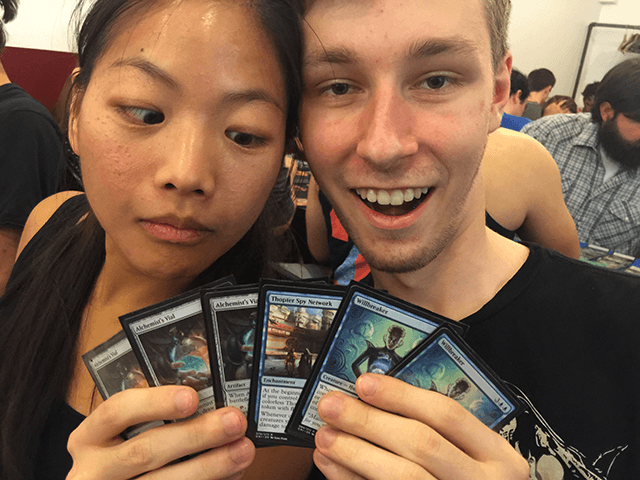 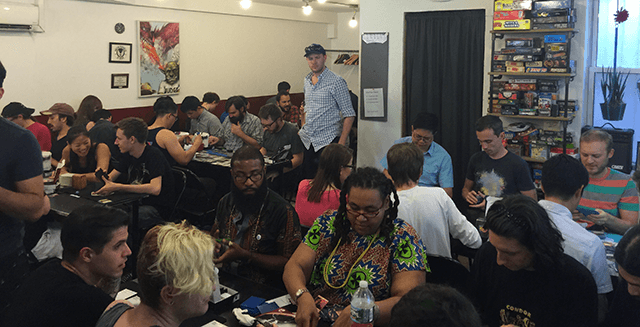