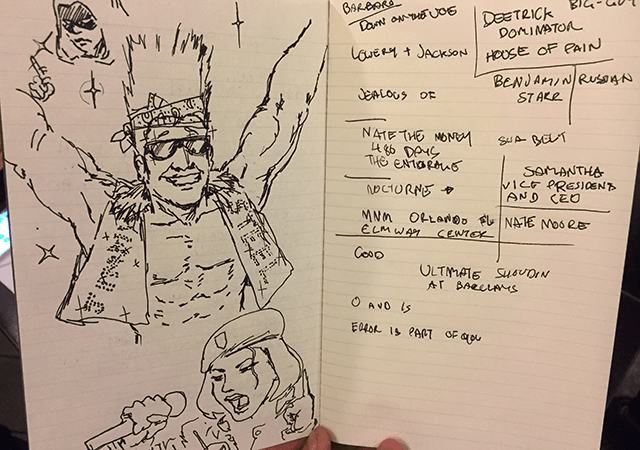 Session 1 - 3/1/17
My longtime readers will know that I never miss an opportunity to road trip. So you can bet that when Starr Wrestling Alliance gets on the Countdown to Showdown, I'll be following them like a VW Bus following the Grateful Dead, only with more steel chairs and less "noodling."

This week, Monday Night Mayhem stopped in Orlando, FL, home of Disney, Sea World, and this week, one of the biggest bombshells to hit the wrestling world in years. Rumors had started to swirl that SWA CEO Benjamin Starr would be making an announcement about this year's Ultimate Showdown in Brooklyn. But no-one could've expected that the Boss would strip Nate "The Money" Moore of the SWA title after almost two years of holding the belt. Apparently, Mr. Starr is as fed up with Moore's dirty tricks and flim-flam as we are and decided to do something about it. So as of Monday, SWA has no champion. A new champion will be crowned in Brooklyn at the Ultimate Showdown, and we'll find out who will fight for the title soon.

Monday night also saw action between the cyborg D-Bug and the mysterious Nocturne. Before the match, Nocturne gave a rare and cryptic address to the SWA crowd, railing against the corruption in the company, and promising a reckoning. Could he have known that The Money would be stripped of his title? Can we add clairvoyance to his list of abilities? I don't know. But if he can see the future, he couldn't see the brass knuckles D-Bug used to finish him off and win the match.

The other match of note was between Diane Lowry and Jimmy Steel, a match of red, white, and blues. Diane, with the crowd behind her, mounted a solid offense against the All American Boy and looked to be close to taking the match. But unfortunately for the French Phenom, the match was interrupted by the monstrous Dietrik the Dominator. She still picked up the win, but the word from backstage was that Diane left the building in the back of an ambulance. It would seem that Steel made a deal with Dietrik and the House of Pain. Something tells me he may not like it when Dr. Moreau and his monsters come to collect.

That's it for me from sunny Florida. See you in Raleigh, NC for the next Monday Night Mayhem and the return of Stalwarth Jackson as the Countdown to Showdown continues!