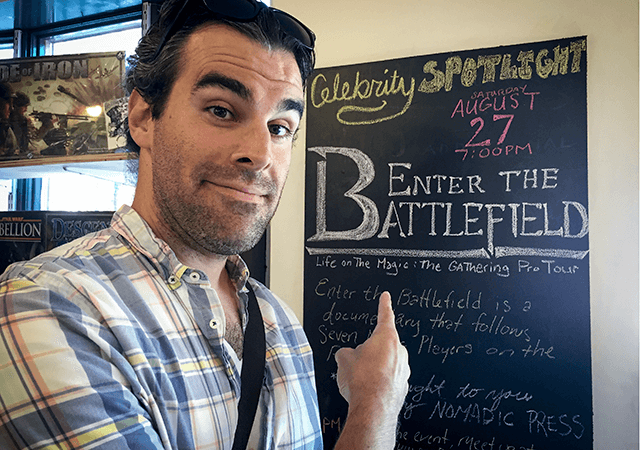 This weekend Twenty Sided Store will host its second Nomadic Press Event organized by Christain Niedan. After reading so many of his amazing interviews (especially the one about me), I decided it was time I interview him.

[Lauren] Nomadic Press began in California, is that right? What brought you to New York?

[Christian] It was started by my former roommate here in Brooklyn, J.K. Fowler, who moved out to Oakland, and founded Nomadic Press out of a space in the Fruitvale section of town. From the start. he planned it as a two coast organization, binding together the creative writing communities in the Bay Area and Brooklyn. Since I already lived here in NYC, I joined the board, and began writing reviews and interviews for Nomadic's website.

[LB] Have you always wanted to be a writer? What was it like getting into it?

[CN] No, I only wrote for English class assignments until college. Then I decided to write professionally in my last year at University of Pittsburgh, when I wrote for the school paper. When I graduated, I continued the news track by writing for The Jersey Journal newspaper in Jersey City, but then I decided I didn't want to pursue a low-paying career in print journalism. More recently, I've been working as a marketing writer for eBay, which pays better and keeps me plugged into evolving products on the market -- because I have to learn about the latest smartphones, virtual reality gaming headsets, and Stars Wars collectibles, so I can write about them in an engaging way.

[LB] You host so many events - all over the city, in bookstores and coffee shops - with so many talented people, what is it like putting these events together?

[CN] I'm grateful that J.K. has let me and my co-organizer Dallas Athent experiment with different styles of events, and NYC provides plenty of unique creative groups and venues to work with. Again, it's about encouraging creative communities -- especially if they have a writing or performance focus -- like GAMBAZine, Brooklyn Wildlife, and Greenpoint Writer's Group. The one obstacle is that the Brooklyn side of Nomadic Press doesn't have a dedicated space like Oakland does, so we've put extra emphasis on forging good relationships with venues like Pine Box Rock Shop, Hell Phone, and Christopher Stout Gallery in Bushwick, and Brooklyn Art Library and Twenty Sided Store in Williamsburg. When it comes to curating an event's line-up, Dallas or I will start with a concept, and a couple of performers who would fit, and then add a few more and usually a musician.

[LB] Your Talking Paper Interview series has expanded beyond writers and poets, tell us a little bit about what it was like interviewing Mark Rosewater and Nathan Holt.

[CN] I like interviewing writers who have a unique approach to their work, whether they write they poetry, prose, biographies or games. Fantasy game writers have always interested me, because to do it well, you have to be creative without slipping into cliche.

My first Talking Paper interview on the subject was with English game designer Steve Jackson in February of 2015. Steve played a huge roll in making Dungeons & Dragons popular and available to England's gamers in the mid-'70s through a shop he ran, and he then went on to pen game books in the '80s and '90s, including his four-part Sorcery! series, which was turned into a really cool mobile game by an English outfit called inkle. So naturally, that led me to interview inkle's co-founder Jon Ingold about Jackson and Sorcery!, and another super successful fantasy mobile game of theirs called 80 Days, which is a very steampunk take on the book Around The World in 80 Days.

With regard to Magic: The Gathering, it satisfies both the writing and paper aspects of the interview series theme, and I happened to be friends with Nathan. When the Vice episode about the Magic Pro Tour came out last year, I reached out to Nathan about an interview on the Tour, since he produces videos about it for Wizards of the Coast, and to get his thoughts on the creative and business aspects of the game. Nathan comes from an acting background, as well as loving the game, so his Planeswalker character interested me. Their work on the Walking the Planes video series made Enter the Battlefield all the better, since they got to refine their filmmaking style beforehand.

With Mark Rosewater, I figured I might as well start at the top for an insider's interview about the game's creative process and literary influences, and I'm glad he said yes. A big surprise with his interview was that it turns out he was way more of a science fiction, Philip K. Dick fan as a youth than a fantasy Tolkien fan, and continues to read a lot of non-fantasy stuff when he's off the clock.

Enter the Battlefield with us this SATURDAY at 7pm.

A documentary by Nathan Holt & Shawn Kornhauser about life on the Magic the Gathering Pro Tour.